from where the old road ends and a whole new world begins . . .

"A precise and insightful piece of musical art. A terrifically presented album, one that befits a master of their trade," Ian D. Hall, Liverpool Sound and Vision Magazine.

"The Japanese have a word, 'shibumi', for the true sophistication of simple things and 'A Traveller's Tales' is rather like that. Above all, what you have is Sutherland's ability to write a cracking song undiminished by time, enhanced rather by life's lessons along the way. It's almost as though an elder is talking to those around him. They won't fully understand (because they haven't lived the same life) but might just be helped to shorten the journey to get to a better place." Mike Wistow, Folking

"Couched in a blend of rootsy folk and country, as the title suggests these are songs of the road, literal and metaphorical. Walk with him and share the stories." Mike Davies, Fatea Magazine.

With musical friends old and new I recorded 'A Traveller's Tales' in Gardenstown, Banffshire, during the summer of 2018 and the early months of 2019. Joining me on this one are a couple of folks I haven't had the pleasure of working with before, Heidi Browne on fiddle and fellow clansman Dave Sutherland on double bass. My old pals Dave McGarry and Terry Butters take turns at the piano, Nick Zala pedals his steel guitar, Sam Lumsden hits the tubs and Steve Watts fires up his vintage synthesizers to add a splash of electronic colour here and there. Nancy K Dillon sings a duet with me from way out west as Heidi Browne, Debi Doss, Claire Kennedy and Gillie Nicholls do their backing harmony thing. It's been a real pleasure working with such a lovely bunch of people, a worthy crew indeed, and I hope you like what we've done.

Tune in if you fancy a listen . . .
Hit the dial for a taste of what we've been up to. It's a quick mix of "The Weary Traveller" from the latest sessions.

Sam would like to say hi and thanks to James at Beier Drums and Dil at Porter & Davies and I would like to thank Tim Berners-Lee for making it possible for us all to work together. Recording techniques have changed in many ways since I first got involved way back in the sixties but, no matter how sophisticated and versatile the technology becomes, it's still all about people, their ideas and how they communicate. Big thanks to everyone who helped me tell these tales. Cheers. GS. 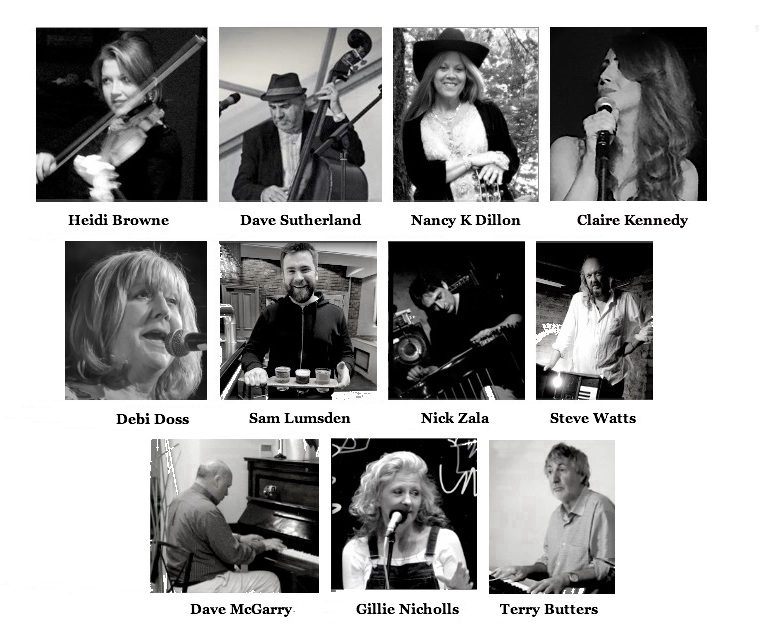 It's all out there, go and get it
The master's word, I won't forget it
The time is right it's now or never
The bitter blast won't last forever
Go find your way

Take your chances, stake your claim
Get out there, play the game
Sons and lovers, kings and queens
Spread your wings and dream your dreams
Go find your way

I saw you down the road with a suitcase in your hand
The way it had to be
You pulled the winning card and laid it down on me
Well, c'est la vie

Hold fast and run the weather
The boys out there are boxing clever
Fight your corner, turn the page
Bite the bullet, rattle the cage

In the palace of wonder they made their way
A museum of greatness from a distant day
The painters and poets put a mark on me
A light in the darkness, a calm on a restless sea

More hope than glory out there right now
Same old story, got to hang on somehow
The book is written, what will be will be
We're all in the same boat
Drifting on the same sea

The wheels are rolling, rolling away

Oh my Lord, I must confess
I was out there in the wilderness
A little mixed up you might say
The wheels were rolling, but I lost my way

Just got word from a friend of mine
He was out there yeah he crossed the line
He got a little messed up, from time to time
But his wheels kept rolling, he's doing just fine

Oh my Lord, I must confess
I was out there in a wilderness
Got a little mixed up, some may say
But the wheels were rolling, now they're rolling my way

I watch the silver river sparkle as she flows down to the sea
I hear the rumble of the ocean, crying out me
When I look out there I see no borders, no boundaries, no walls
From somewhere in the distance the voice of reason calls

The moonlight holds so many secrets, what a story it could tell
The good and bad and where the blame sits, the forever giving well
Now here's the thing, those bells will ring and one day bring us all together
The night has spoken and now gives way to the rising of another
Precious day

All the time we threw away, confused and down
Dark and distant days but a new day's come around
Now we can walk and talk things through
In a way that only good old friends can do
And let it all shine down
Bright like the sun in the summer rain

8. The Bend In The River

By the bend in the river, where the willows grow
We'll get together, in the twilight glow
Talk of the future, talk of the past
Share in the wonder, where the spell was cast

The birds have flown, all is peaceful, calm and still
As the sun goes down on Friday Hill

In the quietude, I find an interlude
And watch the sun goe down on Friday Hill.

10. Gull With A Broken Wing

There's a gull out on the rocks with a broken wing
I think we know what the night will bring
Mother Nature, running wild
Mother Nature plays a tough game

There's a woman on the shore, a child at her hand
A long way to go to the promised land
Human nature, running wild
Human nature plays a tough game

Bad news, down come the blues
Out on the street in a drifter's shoes
Tough luck, hard lines
Cold comfort and hard times

I've been here before,
I know this place,
I know, for sure
I've seen that face,
In the picture on the wall
I recall,
The sound of rain on the window
And the late night squall

Looking out to the northern sky
Where the glow of the summer dim
Shines a light where the old road ends,
And a whole new world begins
Yeah, I've been here before . . . .