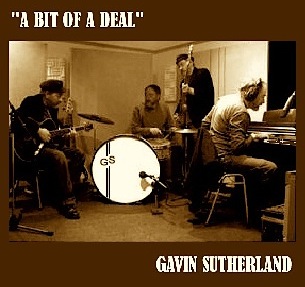 The original album, 'THE DEAL' was released as a limited edition back in 2008. It sold out pretty quickly so, because we get mail from folks who want to know more about it, we've put these tracks up on the download web stores as a 'download only' kind of deal.

Some country blues with a dash of home made rock and a few odds n' sods from the great library of chops, licks and grooves that at some time or another, in some way or another, found a way into my heart. All I had to do was melt it all down and stir it back up into the wonderful noise we generally describe as rock'n'roll.

These songs were recorded in the North of Scotland during January and February, 2008, written, performed and produced by Gavin Sutherland and recorded and mastered by James "The Tonmeister" Hunter.

The Deal
The whole thing's a deal. Your deal, my deal, good deal, bad deal. Have you read George Monbiot's Captive State? Worth a look. When Thom read it he said he'd never take the government seriously again.
"Maybe I'm a giver, Maybe I'm a thief,
You can look at me in wonder, or disbelief . . ."

Strange
So the guy in the spaceship is looking down on the little planet we call Earth, trying to work out what the two legged uprights are all about. Every time he thinks he's got it, a new, unexpected factor leaps into the equation. They love each other, they hate each other, they give to each other, they steal from each other. It's all very strange!
"Some people cruisin' round out there, in a black limousine,
Some people dead on their feet, I think you know who I mean!"

Morocco Jive
I remember stepping off the ferry in Tangiers harbour and thinking "Wow, I'm in Africa!" It was just so different from anywhere I'd ever been and looked so different from anything I'd ever seen. The whole vibe blew me away. I was browsing through a book in the library a few months back when I came across some art work that reminded me of Morocco. I closed my eyes and drifted back there, laid back, feet in the sand with a warm wind blowin' from the Promised Land.

The Raven
According to the Ancient Lore of Caledonia, The Raven's eye is on us day and night. Abuse the land that provides for us and we'll be punished! Watch "The Age Of Stupid" when you get the chance. It's very important.
"Black rain's comin' down on you, it's gonna chill you to the bone,
Dark fear's gonna walk with you, wherever you go . . ."

Kelly's Waltz
In my previous life as a pub philosopher I tried to work out what it was all about. Maybe if I made a list of all the things it wasn't I might, sooner or later, stumble on what it was? I eventually conceded that it is what it is, and that's that. Anybody fancy a dance?

Where Would I Be? (If You Weren't Here)
I wrote this song for all the people who have shown me kindness over the years. You know who you are. Cheers!