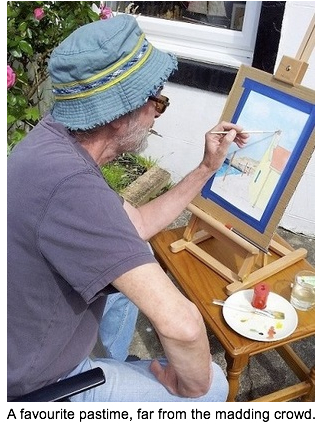 I was born in Peterhead, a fishing town in North East Scotland on October 6th, 1951. My father, a semi-pro dance band leader, was playing a dance at the local Palace Hotel when I arrived so music has played a big part in my life since the very beginning. My brother, Iain, and I were brought up surrounded by music and 'music talk' as my dad's friends visited the house to discuss new tunes and arrangements. His collection of swing band and jazz records had a strong influence on us both. It was all about rhythm. My great grandfather was a fisherman who played fiddle at the local weddings and wakes and was chorister at his village kirk, so I guess there must be some 'do-re-mi' in the DNA.

The family moved to the Midlands of England when I was about six years old. A serious culture shock for Iain and I and a struggle for me at first, a little kid who spoke a broad North East Scots' dialect in a school room full of kids who spoke a 'Potteries' dialect that meant nothing to me, but I got used to it and eventually settled into a new way of life. A friend who owned a tiny Dansette record player introduced me to rock n' roll a few years later when I first heard the sound of Buddy Holly, Eddie Cochran and our home-grown Shadows. Like a lot of kids at that time I wanted to be Hank Marvin, and got my first guitar for my tenth birthday. Not long after that I heard an amazing sound on a crackley transistor radio tuned in to Radio Luxemburg. When the record ended the DJ told us the song was 'Love Me Do', the new single from a Liverpool group called 'The Beatles'. I didn't realise then just what a powerful effect that two or three minutes of music was to have on my future.

I left school at the age of sixteen to join the band my brother had formed with a couple of school pals. 'A New Generation' did some recording for Southern Music's 'Spark' label and gigged a lot in the UK before we disbanded. Iain and I decided it was time to move to London, the only place to be at that time if you wanted to give the music business a serious go. Everything was there, record companies, studios, publishers, promoters, agents, yes, everything. There was nothing going on in the UK music business outside London at that time.

There was a sense of freedom around back then, but not a lot of money, so hitch-hiking was the standard mode of transport for young people. I remember standing at the bottom of the M1, thumb in the air, when a Land Rover pulled over. Opened the door, and it was the inimitable John Peel. Nice one! We'd recorded stuff for his shows at BBC's Maida Vale studios quite a few times but had never met the guy. For the next few hours we talked rock n' roll and football, my two favourite subjects, as we headed north to see the folks. Nice bloke.

We'd been in London, working in a store to pay the rent, for a few months before a friend of ours got a tape of some songs to Muff Winwood at Island Records. He liked what he heard and signed us to the label. After a short audition session in their Basing Street studio we were given the go-ahead for a three album deal. What a buzz! We celebrated with beans on toast and a pint of tea around the corner in Mike's caf.

We recorded our first album as 'The Sutherland Brothers' Band' with an old pal, Neil Hopwood on drums and Kim Ludman, a bass player who joined us after an audition day in a pokey little rehearsal room in Shepherds Bush. We gigged around until that combo broke up, leaving just Iain and I working the pub, club and the college circuit as an acoustic duo. We were looking to work with other musicians and our manager, Wayne Bardell, told us he knew of a band who were looking for a singer and writer. We went along to a 'Quiver' gig in a pub in north London and met the lads. We got on just fine and decided to try a bit of studio recording together. The very first tune we put down, 'You Got Me Anyway', went top twenty in the States and at the same time we were invited by Elton John to open for him on his 'Yellow Brick Road' tour. That was our first time in the USA and we had a ball. Everywhere we went the "Yellow Brick Road Show" was big news. The crowds were massive and the media attention was pretty intense. We played all those cities we knew from school geography classes and Chuck Berry records, from Madison Square to the Hollywood Bowl and everywhere in-between.

We spent a lot of time there over the next few years. Rod Stewart had a hit with our song 'Sailing' and we had a hit in the UK and all over Europe with 'Arms of Mary'. That song was later covered by The Everly Brothers, a bit of a mind blower for both Iain and I as we used to work out their harmonies and sing some of their numbers when we were kids. To know they'd done the same thing with ours was something special. A thing that stands out in my memory of that time was when 'Mary' was number one in the South African 'white chart', yeah, back in the days of apartheid when black and white folks couldn't even share a music chart!, the B side down there was a song called 'Something's Burning'. It was picked up by the black stations and went to number one in the black chart. We were very proud of that. A one-off as far as we know.

We gigged here, there and everywhere, opening for, and learning from the likes of Elton, The Faces, Lynard Skynard (Bless 'em all!) The Kinks, Traffic and many more before we started to headline our own tours. It was a busy time for us. Playing all over the place and recording in some of the world's best studios. 'Air' London, 'Criteria', Miami, 'The Village', Los Angeles, CBS, Paris and, the icing on the cake, 'Abbey Road'. The Shadows' Bruce Welch produced our last SBQ album at Abbey Road. He told us some great stories about their early days, touring the States in a time when white and black musicians shared the bill but travelled on seperate busses and stayed in different hotels. Hard to believe, but true. As a treat for us lads he brought a guitar into the studio one day, no ordinary guitar, it was a Strat, the first one ever to come into the UK back in the late 1950s. Cliff had it imported for Hank who was looking for that clean, 'twangy' Buddy Holly sound. We all had a go on it. I played a bit of FBI, one of the first tunes I learned to play as a kid on my dodgy little acoustic, but now I was playing it on the guitar Hank used on the original record. Magic!

SBQ eventually split and Iain and I returned to focus on our writing. The last time the two of us walked onto a stage together was at the 'Fairport Convention' Cropredy Festval with Dave Mattacks, Dave Pegg and Jerry Donahue behind us. A great wee band. That was about thirty years ago. Yes, time flies!

The sea played an important part in my early life, as it does today now I'm living back home, not far from where I started out. It's always been a handy metaphor for both Iain and I as writers, the calms, the storms, and all that. Researching my own family history on return to Scotland some years ago became a bit of an obsession after I discovered one of my great-grandfathers served aboard some of Peterhead's many 19th century whaling ships. Following his story led me to a complete study of the industry in the town and my notes eventually led to a book on the subject being published by The Centre For Scottish Studies, Aberdeen University. I went on to edit two more books for publication, both of them local memoirs from the early 1900s.

In the late 90s, after the planned short break had turned into quite a long one, I got back into my music and started writing songs again. The first batch of wee, home-made songs became the album 'Diamonds and Gold' and was released by Dutch record company Corazong. After that came 'Tango At The Lost Cafe' (the title track written in honour of my favourite eating place, not far from where I now live) which gave me the opportunity to work with some good old friends, including Tim and Willie from Quiver, Billy Rankin from Brinsly Schwarz, and even a Hitchcock vocal harmony appearance from big brother. A year or so after that release I began work on the album, 'A Curious Noise'. It was good to be working with John Wright, drummer with my very first band way back in the 60s, and Carl Damiano, a piano player I had the good fortune to meet up with while out and about gigging a couple of years ago. As things developed we were joined by backing vocalists Rachael Brown, a local talent, Debi Doss, a session singer who's been a pal since we met and worked together with SBQ in the late 70s, and horn player Alexander 'Drew' Jarvie who leads the local brass band. My latest work, 'Wireless Connection', is out on the German label, M.I.G. A few new faces on this one including pedal steel player Nick Zala and cellist Gareth John.

By way of a diversion I've recently got back into painting as a pastime, something I haven't done for many years. The Japanese Sumi-e and Chinese ink and wash styles have really caught my eye, love their gentle approach to the whole thing, and painting Scottish mountains is another personal favourite. I might even put an exhibition together one day. That would be interesting, always good to have a bit of a project on the go.

I have had the good fortune to enjoy my life as a musician, and the privilege of working in the company of some great musicians and record makers through the years, way too many to mention. I want to thank them all for the music we made and the fun we had together and I look forward to the next chapter.

That's about it, for now. Cheers, everybody, love and peace!