a collection of songs written and recorded during the isolation months of 2020 . . .

During the months of lock-down we hooked up through the net to record some new songs, keep focused and reasonably sane. Irmi Wolvin played her cello in Vienna, Dave Sutherland played his double bass near Birmingham, Sam Lumsden hit his drums in Inverness, Digby Smith played some accordion and mixed the tunes at his studio in Torquay, and I sang and played guitars and things at home on the Banffshire coast.
Readers of a certain vintage will remember those 45 r.p.m. four track vinyl discs, and here we've gone for the digital equivalent of the good old 'EP'. Like the man said, 'introspection finds fresh expression' and it certainly did for me.

It all started back in January when I began work on some new songs and as things came together I decided to give Dave Sutherland and Sam Lumsden a call to see if they fancied joining in. Dave's double bass and Sam's drums had featured on my last two albums so I knew it would work out fine. The ball was rolling and we started swapping music files back and forth over the net and letting the whole thing develop as we went along. We didn't know where it was going, but it felt good. I wanted my old pal Digby to master the songs, and as we discussed matters he suggested I send him the individual tracks ('stems' in digi-speak, apparently) down to his studio in Torquay to mix. Great! Game on and of course really good to have him on the case. 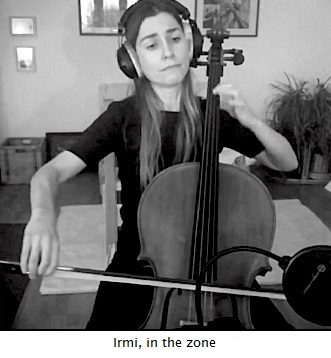 As I was working on the title song it crossed my mind that the intro melody line might sound good on a cello, but as I didn't know anyone who could deal with that and all the web tech involved, the idea went no further. A few days later, and quite out of the blue, I had a message on my fb music page from Irmi Wolvin, a cellist in Vienna who had been checking out some old Suth's stuff and said if I ever needed a cello on any of my songs she'd be up for it. We messaged each other and as we got to know more about each other I found that not only was she a great musician but also a lovely, energetic and enthusiastic person who I knew would fit into our band of locked-down isolatoes really well. Her cello sounded so good on the first tune she played on we decided it would be great to have her on all four of the songs we were working with. Irmi was enjoying the music and her cello put a new colour in the mix. It gave the band a sort of fresh identity and it's always good when the Muses step in and lend a hand. I guess some things are meant to be.

Life has been strange for us all recently, face masks and the 'two metre' rule, like living in an old sci-fi novel, and for many, a time of reflection and contemplation. Working with these good people over the last few months certainly helped me through this troublesome time. Fact stranger than fiction. Strange days indeed!

We enjoyed making this music and hope you like what we've done. Cheers.

"Working on this very special music with all these great musicians made this difficult time so meaningful. Thank you guys for a brilliant time!" Irmi.

""It will be great to come out of 'lockdown' having contributed to creating some valid art! Always great to work with Gav and his band of wandering and far reaching minstrels. God bless the internet!" Dave.

"I first worked with Gavin back in the early '70s at Island's Basing Street Studios. The Sutherland Brothers had successfully passed the audition with producer Muff Winwood, and were duly signed to the label. It was early days for both me and Gav in terms of studio life, and to have linked up together again after all this time seems like a continuation of that same joyous, creative journey." Digby

"Thanks to everyone involved with this lockdown project; contributing drums has been a pleasure. The gigs may have stopped for now, but we are fortunate to be able to keep making music. Sam

Out on the town tonight
Looking for a long lost friend
Could be the start of something
Or is this where the story ends?
A string of pearls and a diamond ring
Who knows what your luck may bring
Cut the cards and see what they say
The Queen of Hearts might come your way
Some day

Been living the highlife
Doing the highlife thing
Hanging out with the man in black
Drinking wine with the Pearly King
If he gave you three wishes
Now what would they be?
One for you, one for me
And one for the wisdom in the wishing tree

All I See Is Blue

The waves on the sand
They slip through your hand
Tides are turning
No reason no rhyme
No place and no time
Bridges burning
The night brings the day
The day brings the sun
We share in the dream
Together as one
Is this fantasy, coming down on me
A sign of the times?

The nightbird she's flown
The day brings the sun
We share in the dream
Together as one
Is this fantasy, coming down on me
A sign of the times?